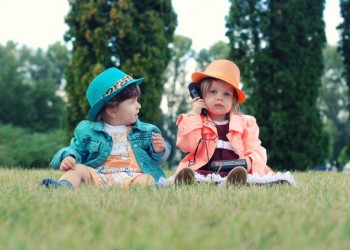 As we’ve noted in several articles and research reports, kids can now be reached almost anywhere thanks to mobile phones. Today’s portable devices offer a host of other connected options, but still retain the standard ability for kids to call each other and chat. There are even programs like Skype that can provide devices that weren’t meant to be phones with the ability to make calls through digital means as long as they have an Internet connection, speaker and microphone. On the flip side, there are also phones such as Kajeet that provide limited voice-calling options, full parental controls and even GPS tracking which can be a great introduction to the world of cellular phones for kids. Although there are many other ways for kids to stay connected, one shouldn’t forget – many are still using good “old-fashioned” voice communication. According to the Pew Research Center, calling is still a central function of the cell phone for teens, and for many teens voice is their primary mode of conversing with parents. Granted, teens do make and receive far fewer phone calls on their phones than text messages, however.

According to a Pew Internet & American Life Project survey, the frequency of teens’ phone conversations is actually on the decline while other electronic and Internet based forms of communication are on the rise. Only 14% of all teens say they talk daily with friends on a landline, and 26% of teens talk daily with friends on a cell phone, down from 30% and 38% in 2009. And nearly a third of teens say they never talk on a landline with friends – a fact which may come as a surprise to parents who grew up simply dreaming of having their own phone line.

Realize, though: As the “Trojan horse” that provides millions of kids with online connectivity, phones – and smartAphones in particular – remain poised to offer kids the ready opportunity to make voice calls on-demand nearly anytime, anywhere. As such, wireless providers can also play an active role in providing a way for parents to monitor teens’ phone usage, well beyond simply just tracking their voice calls.

T-Mobile looks at tools that provide guardrails to parents that are non-intrusive, says Mike Vance, the company’s former director of web and cloud services. For example, parents can throttle the amount of data that can be used, or configure the phone’s features to only be available at certain times of the day.

However, while the level of controls that parents have over these capabilities differs by provider, one of the primary control methods many parents opt for is to go the prepaid route, which means that instead of signing a one- or two-year contract for cell phone usage, service can be paid for as you go.

Interestingly enough, the Pew’s surveys show that the most frequent texters are also the most frequent talkers. Texters who exchange more than 100 texts a day are much more likely than less active texters to say that they talk on their cell phone daily. More than two-thirds of heavy texters talk daily on their cell phones, compared with less than half of those who send less than 100 texts a day. In other words, if your kid’s a chatterbox in everyday face-to-face scenarios, chances are they’re also engaging in a lot of regular conversation – online or otherwise, whether you realize it or not.

For more information here, don’t forget to grab a copy of Parenting High-Tech Kids: The Ultimate Internet, Web, and Online Safety Guide too.