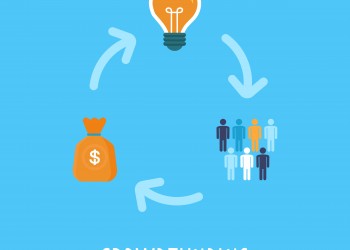 We’ve all seen the headlines and heard what financial speakers have to say: Dreamer launches crowdfunding campaign, wildly exceeds goals, becomes major success story. Seen less often is the grim headline that roughly 60% of all crowdfunded campaigns fail, but it’s important to be aware of the many pitfalls that accompany the potential successes of crowdfunding campaigns. Luckily, there are a few experts out there willing to share their wisdom on what it takes to set up and manage a successful campaign. We interviewed Steve Young, founder of Synek, for his take on the pros, cons, and in-betweens of crowdsourcing funds for projects.

S: Why has crowdfunding struck such a successful chord with backers – what is it that makes the concept so compelling that maybe even financial speakers haven’t been able to get across just yet?

Y: Crowdfunding is a way that you can actually be a part of the next best thing. If the company is smart, they utilize the feedback from the backers to polish o many of the unforeseen blemishes before they reach the market – bottom line, the backers actually have an active role in turning an idea into reality.

S: What’s so appealing about crowdfunding from the perspective of a project creator? What does it allow you to do that you could never do in the past?

Y: It allows you to do three big things: 1) prove demand without raising a lot of capital, 2) acquire extensive customer feedback, and 3) accumulate evangelists to spread the word about your idea/vision.

S: What are some of the upsides and challenges of going through the crowdfunding process? Why would someone choose it over trying to go the traditional investment or venture capital route that financial speakers and other experts might not always get across?

Y: Being short and concise. Backers don’t have time to spend 30 minutes on your page to understand what your vision is. If you don’t capture them in the first paragraph or first 15 seconds of the video, they move on. If a company is fortunate enough to gain a lot of traction and momentum, then fulfillment is very difficult as well. Most ideas start selling in a specific region and expand once they have enough traction. Crowdfunding forces you to launch worldwide which could spread some ideas too thin.

Y: Crowdfunding is highly marketing skewed. A lot of great ideas don’t get funded because they don’t communicate their vision properly. The most funded project (Coolest Cooler) failed the first time because they marketed it towards parents and soccer moms. The second video marketed it to anyone who drinks alcohol – reaching the core crowdfunding demographic.

Y: Anything with a tangible product. People want to show o what they sponsored on crowdfunding, and there is no better way to do that than with a physical object.

Y: Yes/no. I think crowdfunding will evolve to where people with different levels of interest could actually have an equity stake in the company, not just a product. There is no reason why we can buy penny stocks, but cannot invest in startups. It is starting to change, but it’ll take another three years to open up.

Y: It shows that any company can take on the giants in the industry through the power of the people. It seems like a fad, but it is a monumental change in the way that business is constructed.

Y: Listen to your customer feedback LONG BEFORE you launch your campaign. All that negative feedback does is save you time.

Y: Most ideas, even if funded, will take additional capital to get to market. The time to market will also take longer than expected because of these extraneous factors.

S: What would you tell anyone who’s thinking of going the crowdfunding route? Is it every bit as cool and amazing as they might imagine or expect even after hearing financial speakers and experts praise it?

Y: Spend about four months preparing to launch your campaign. Get about 10,000 emails of people you can reach out to spread your idea. It is a lot of work, you cannot just flip a switch.