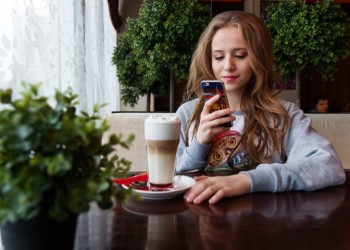 Once upon a time, many kids dreamed of getting their own landline – one they didn’t have to share with other family members, and where they’d worry about someone accidentally interrupting online transmissions by picking up the handset in the middle of them. Today, the decision to let your kids use a cell phone is virtually a non-option, being less a choice of if, but rather simply when you’ll get one for them. One thing we certainly learned while researching recent bestseller Parenting High-Tech Kids: The Ultimate Internet, Web, and Online Safety Guide is that technology changing, and so is parenting – especially when it comes to teaching kids how to communicate responsibly.

Keep in mind: Portable handsets are becoming increasingly affordable, with many cell phone carriers even providing families with mobile phones for free in exchange for fixed monthly subscription plan signups. Thankfully, basic feature phones and smartphones alike can provide invaluable peace of mind for parents, helping kids stay in touch when out of sight or in case of emergencies, helping you keep tabs on them and enjoy a sense of sustained contact even when they’re away from the nest.

Near ubiquitous, some would argue that you may actually be doing kids a disservice by not providing access to these handsets, with 77% or more of kids aged 12-17 now owning a cell phone, according to Pew Internet Research. Other surveys that have examined a broader range of age groups have found similarly widespread ownership levels, indicating that at least two-thirds of kids between 8 and 18 today boast their own cellular device – no surprise, given the constant connectivity and handy access to everyday tools (e.g. maps, local business information, and weather reports) such devices provide. But it bears remembering that while many of these gadgets are simply basic cell phone models, sometimes referred to as“feature phones,”a large portion of those in kids’ hands are so-called “smartphones,” which provide much more than convenient ways to make phone calls.

Offering Internet access and hardware performance that’s growingly on-par with home computers, these portable solutions can provide similar functionality, and even display Web pages or run software programs, the same way that a desktop PC does. Mobile computers unto themselves, smartphones let kids share photos, videos and status updates online; chat and connect with one another; send multimedia or text messages directly to other handsets; purchase and download applications that let you share information such as personal likes, interests and locations; and make it possible for children to engage in playing games, communicating online and videoconferencing with their friends, growing trends that more and more kids are enjoying.

Many children actually use their smartphones as a primary way to stay connected to social media services and networks, such as Facebook, Twitter, Instagram, Pinterest, Snapchat and more. As a point of note, the ubiquity of smartphones and their increasing usage levels amongst tweens and teens has actually led to a sharp increase in kids’ consumption of media. From Apple’s critically-acclaimed iPhone to prominent rivals that instead utilize the popular Android operating system, smartphones all also present opportunities for kids to purchase, download and install apps (short for applications). Bite-sized and often free or value-priced software programs that add a wealth of functionality, letting devices double as everything from TV remote controls to foreign language translators and GPS navigation systems, apps have become tremendously popular on a host of devices. But they can also present a whole host of opportunities for connecting online too, whether playing games simultaneously, tracking friends’ movements on virtual maps, or just simply chatting with acquaintances in ways that can’t be monitored.

App stores (online storefronts where these programs can be browsed and accessed) are now built by default into the majority of devices, and – like multimedia retail services such as Apple’s well-known iTunes digital distribution portal – provide ample opportunities for impulse shopping. Numerous apps also offer subscription packages and “microtransactions,” or small in-app purchases that can be made from within them (often at not so small prices, once they’re added up), as part of their design. As concerning as the content children choose to consume here is the ready availability of virtual goods that kids may be tempted to buy. Whether shopping for original apps, downloading favorite TV shows, songs and movies, or even buying special in-app items that help advance gameplay in digital diversions, impulse buys – and access to them – are plentiful. There are literally millions of different apps available for download today, and that’s before you count individual pieces of content like songs and videos that kids can also access on-demand. Needless to say, no one parent can hope to keep tabs on all – and that’s before you even consider the potential impact on kids’ shopping and spending habits.

In addition, many of the tried and true solutions that experts and parents once turned to for keeping kids safe on computers, such as traditional anti-virus and Web monitoring software, simply aren’t as effective anymore on mobile devices. “With smartphones, suddenly it’s all out the window,” says Mike Vance, senior director of product management of RealNetworks. “These things are portable custom computers, and you can’t enforce the same usage rules as you could when the device was a common appliance.” Certainly, many software makers and solutions providers offer tools that aid parents with online search result filtering, Internet tracking and the blocking of access to controversial websites. But so many apps and online services offering so much functionality now come out at such a blistering pace (even before you factor in constant the ongoing feature and software updates numerous programs offer), any given number of which may provide kids with a viable workaround, that keeping children safe is now a moving target.

Parents who buy smartphones for their children should therefore be aware of what they’re getting their kids into, as they’re full-fledged computers, urges Vance. “Kids are way smarter than parents when it comes to knowing how to use these devices,” he cautions.“ [Unlike in other areas and fields,] kids are the more advanced users here.” As he explains, an intelligent and motivated child can take an Android phone that’s been “locked down” with parental controls, download a certain app for it, wipe away monitoring features, and then reinstall an operating system and use the phone in whatever manner they choose. There are also other applications that allow kids to chat, send pictures, and even speak directly to each other or engage in video chats with no way to track this activity. What you don’t know may come back to haunt you. “Just because you don’t see it doesn’t mean it didn’t happen,” Vance warns chillingly.

That said, it also bears remembering that many smartphone interactions are highly positive in nature, and that a healthy, well-adjusted child will certainly be able to utilize these handsets in a responsible manner given proper training and supervision. Worth recalling as well: Just because you’ve decided to purchase a phone for your kids doesn’t meant that you have to start them out with a smartphone model, despite the fact that they’ll surely try to convince you of the necessity of doing so. In fact, many experts recommend giving kids more basic phones such as FamilyBase or Kajeet, which can limit numbers that may be dialed, let you track tots’ current location, or provide a set amount of call time each month. Whichever route you choose, realize that an ounce of prevention far outweighs a pound of cure, however. In addition to providing kids with basic training and creating a healthy environment in which they feel comfortable coming forward and discussing related concerns, you’ll still need to actively monitor’ children’s activities in cyberspace, and work to teach kids the healthy computing habits and digital citizenship basics they need to be safe online.

Don’t be fooled either: Kids with feature phones can often use the Internet just as actively as smartphone users would too. Even though these less advanced handsets may lack a keyboard and/or serious computing horsepower, and require use of the numeric keypad to assemble words or phrases, you’d be amazed just how far they can take a determined netizen. To wit, despite seeming limitations, such devices can still keep kids connected to the Internet through basic Web browsers, texting and e-mail capabilities. Consider any cellular phone a potential source of high-tech communications and connectivity.

Interested in learning more about these topics? Don’t forget to read up on them in Parenting High-Tech Kids: The Ultimate Internet, Web, and Online Safety Guide as well.