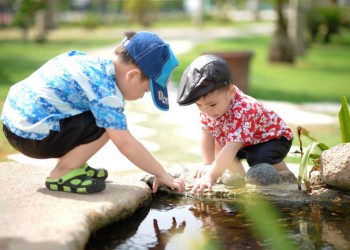 As a parent of a young child, you’re probably wondering what types of technologies, apps, and devices are OK for pre-schoolers to consume. After all, technology is everywhere these days from cell phones to computers, tablets, and video games—but some high-tech options are more appropriate for older children. We take a deeper look at these concerns in Parenting High-Tech Kids: The Ultimate Internet, Web, and Online Safety Guide, but you can get a good starting sense of what options make the most sense for the littlest of little ones here.

Even though the American Academy of Pediatrics recommends zero exposure to devices with screens for kids younger than two, the reality is that many members of Generation Tech will use a computer or high-tech device before their second year, especially if they have older siblings. Many parents even allow one and two year-olds to play games, watch videos and enjoy educational apps on their smartphones or tablet computers. In fact, we’ve all probably laughed at one point or another when we hear stories of young kids touching a TV screen or the screen on their digital camera in hopes of controlling it as they do other gesture-controlled devices. Although we don’t recommend specifically purchasing any tech devices for (or providing ownership of them to) kids this young, chances are they’ll use computers, tablet PCs, smartphones and even video game systems owned by the family nonetheless – and that’s not necessarily a bad thing.

However, it’s equally valid to consider that strong concerns may surround the usage of technology at such a young age, and its impact on overall health, attention span, and developing or impressionable minds. McAfee’s Stanley Holditch wonders what can happen to kids confronted with access to the Internet’s wealth of content without the proper sense of perspective to process and understand certain issues. He cites commonly-portrayed gender roles as just one potential source of confusion, and potential conflict.

Noted family researcher and Parents magazine columnist Richard Rende, associate research professor at Brown University, agrees. Alas, he says, when it comes to hard scientific data outlining such issues, there’s just not enough research available on the subject yet because technology is moving so rapidly. Unfortunately, Rende explains, many extrapolations regarding technology’s supposed impact on kids are being made based on a medium for which there are decades of research – specifically, television viewing. However, due to TV’s passive and relatively limited contextual nature, such comparisons may not be applicable.

In the end, what Rende does recommend is that parents maintain a level of basic human interactivity when promoting technology use. Reading a storybook on the iPad with a child sitting on your lap can be similar to reading a book in the same way, he says. But you must continue to interact and stimulate your child’s intellect and imagination, and not rely on the device to do so alone.

Video Games: At this age, we recommend considering limiting high-tech interactions and activities to storybooks, lightweight forms of entertainment, and (preferably) educational games and software – happily, many options available to this age group combine elements of all. Websites such as FamilyFriendlyVideoGames.com, GamerPops.com and Common Sense Media can also help provide recommendations for apps and games by age group. Also, at this developmental stage, parents should be very familiar with the games and activities that they are letting their kids play, and at the very least playing alongside them for the first time.

Note that there are also a plethora of downloadable games and educational apps available for kids which can be grabbed on-demand. You can visit sites like Famigo, Moms with Apps or Common Sense Media for recommendations.

Internet and Web Access: Computer use for the pre-school set is a bit trickier subject to tackle, given the fact that using a keyboard is difficult since many kids can’t read at this age, and aren’t yet coordinated enough to use a mouse. But although the fine motor skills required for successful mouse control probably won’t develop until sometime around children’s 4th birthday, there are plenty of online games and activities that tots can control by simply pressing any button on the keyboard. Examples include the Sesame Street Online games, and various entertainment options provided by sites like NickJr .com, Family.Disney.com, andPBSKids.org.  Each site also contains great information for parents about age appropriateness and skills learned by participation in featured activities.

E-mail: Pre-K sprouts are obviously not ready for e-mail quite yet. Nonetheless, we’ll note here that many parents enjoyed the recent Google ad campaign which featured a Google Dad who set up an e-mail account to e-mail a picture a day of his young daughter when she was born. So while kids won’t enjoy access to their own e-mail address at this point, it’s not too early to begin introducing them to some of the concepts surrounding it, and how it works. Our own toddlers are already aware when grandparents send them a virtual note, for example, which we read aloud.

Cell Phones and Mobile Devices: While you may let your toddler fiddle with your smartphone or tablet in order to gain a few brief moments of precious peace and quiet while out in public or at home, it’s worth noting that there are also tech toys designed specifically for the toddler set. From tablets to eReaders and gaming devices, numerous kid-friendly technology options are available. While many of these devices have garnered many parenting and educational awards, be aware that, like video game consoles, many require you to buy a specific type of cartridge, disc or app that’s designed only for the system to be able to play. Likewise, not all parents may be comfortable introducing technology at such a young age – let personal judgment rule here.

Social Networks: Thankfully, you still have a few years before your kids get their first social network accounts. But many parents choose to make their children’s photos and even names available to the public online – recent estimates say that 80% of kids will enjoy an online presence by the time they’re two years old. However, we have to question whether this is wise, especially given the growing threats presented by oversharing of personal information and identity theft. Consider that everything you put online can potentially be seen by anyone – and lives on in perpetuity. So even though you’re dying to post that cute picture of your child feeding a goat or riding a miniature train, you may want to think twice about sharing that information.

For more, also be sure to see Parenting High-Tech Kids: The Ultimate Internet, Web, and Online Safety Guide.