Teamwork: Why it Pays to Partner with Competitors 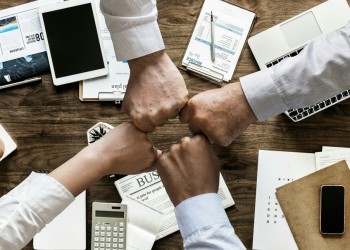 Common wisdom holds that we’re all competing for something in business, whether it’s time, money, attention, or other limited resources. But what if working hand-in-hand with competitors was actually the more effective strategy for getting ahead – and collaborating with rivals could actually help you create more win-win scenarios, and bigger wins, for all?

As a recent study by Warwick Business School helps underscore, companies that actively work to transform adversaries into partners – frenemies of a sort, as it were – enjoy significant boosts to business performance. Nearly 80% of firms expect to collaborate with other organizations more frequently going forward as well. That’s because when you partner with other enterprises, thought leaders, and working professionals, not only do you vastly multiply the number of insights, resources, and opportunities available to you, says Scott Steinberg, keynote speaker and bestselling author of Make Change Work for You. You also radically multiply the number of tools and insights you can bring to bear to achieve any goal – and vastly enhance your ability to solve any problem or capitalize on promising new areas for personal or organizational growth. Finding ways to transform opponents into allies also allows you to neutralize sources of concern while simultaneously turning them into sources of opportunity in one fell swoop as well.

Technology giants Apple, Google, and Amazon have all benefitted tremendously (as have third-party manufacturers) by providing thousands of third-party software and hardware makers – many of whom operating in similar lines of business or industries – the opportunity to integrate their preexisting technology into externally-created apps and devices. (Spot a voice-controlled speaker or connected home device that doesn’t integrate on these firms’ technologies, e.g. digital assistants Alexa and Siri, and you’ll spot an item destined for the clearance shelf.) Likewise, leading console makers Microsoft, Nintendo, and Sony all publish award-winning video games. But these industry titans also benefit from providing other enterprising game developers not directly affiliated with their organization access to their publishing and distribution systems. And, for that matter, frequently form temporary or lasting alliances with software studios (with whom they may have previously or will someday find themselves competing) to create trailblazing software hits.

Even the staunchest of adversaries can find upsides in collaboration as well. Case in point: Intel and AMD, longstanding rivals in the war to produce computing processors and microchips, who – after decades of direct competition – announced they’d be teaming up to produce a laptop computer chip that uses an Intel processor and an AMD graphics unit. The joint venture is designed to help both firms siphon market share from visual computing giant NVIDIA – and at less time, expense, and risk to both. As Karen Lawson, chief executive of startup accelerator Slingshot – which recently launched CoVentured, a program that helps small start-ups and large corporations connect to team up on projects – succinctly puts it: “If you work together, what you can achieve is incredible.”

Again, as you can see: Finding smart ways to collaborate can lead to ventures that collectively equal far more than the sum of their parts.

Even Microsoft – once famous for its proprietary technology and closely-guarded approach to doing business – and rival Amazon recently found ways to play nicely together In the last year, the two technology giants partnered to help make rival digital assistant platforms Cortana and Alexa better. For example: Alexa can now ask for Cortana to help with Microsoft-related products, and Cortana can do the same for Amazon’s goods.

Why would two of the big four (the others are Apple and Google) decide to work together after literally decades of rivalry? It comes down to tech innovation and market share.

Both Amazon and Microsoft know they can enhance sales, improve user-functionality, increase product performance, and boost customer awareness and satisfaction by collaborating. And the more various technologies can talk to each other and maintain compatibility, the easier it is for developers to create products for these systems, and for end-users to enjoy them.

What’s more, Amazon also realized that giving up some market share, while an immediate expense from a short-term standpoint, would actually increase its power over a long-term horizon. As The Verge points out:

The New York Times reports that Microsoft and Amazon partnered in May last year, after Amazon CEO Jeff Bezos raised the idea with Microsoft CEO Satya Nadella at Microsoft’s CEO summit. Amazon’s push to partner more closely with Microsoft makes sense, as the pair are both trying to fend off Google’s own assistant and Microsoft already helps power Alexa queries through its Bing search engine.

Curiously, Amazon founder Jeff Bezos also states that he welcomes Apple and Google to offer similar integration, and says he’d support it. By opening its arms to rivals, the company can actually grow its business, explore new areas for partnership, and reach audiences it may never have connected with before.

Best of all, when you collaborate with rivals, you also create massive benefits for clients and customers, who frequently benefit from the superior products, services, and solutions that result. After all, the more you add fresh and capable perspectives, tools, and insights to your brainstorming and development efforts, the faster and more effective the process of innovation tends to be.

Put simply, you can continue to fight tooth and nail with rivals, possibility to diminishing returns and the detriment of all. Or you can find clever ways to team up, work together, and expand your profits and horizons at less time, effort and expense – creating huge win-win scenarios for all.