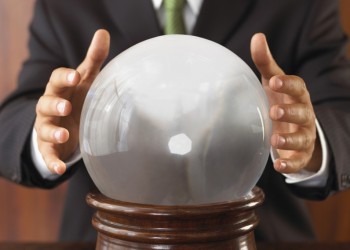 You don’t have to be a generations speaker and consulting expert to realize: Each generation has positively impacted our society and changed the ways in which we relate to one another, often for the better. Trends are constantly shifting and presenting new challenges and opportunities as we communicate within the workplace, however. In order to find out more about how to stay ahead of them, we interviewed Kim Parker, Director of Social Trends Research at Pew Research Center, to hear more about current trends for Baby Boomers in particular.

S: What do readers need to know about Baby Boomers from your perspective as a generations speaker and expert – and what interesting facts about this generation do many casual observers miss?

P: The most obvious thing that distinguishes Baby Boomers is their age (or the years in which they were born). They’re the product of a spike in births that started shortly after World War II and ended right after the introduction of the birth control pill (1946-1964).

Historically, the Boomers are seen to have had a major impact on American culture, especially as they came of age in the 1960s – challenging authority, protesting against the Vietnam War, pushing the boundaries of social change. Our data doesn’t go back far enough to analyze these aspects of the Boomer experience.

S: A few unexpected things people would never guess about members of this generation would be…?

P: We did a report back in June of 2008 entitled “Baby Boomers: The Gloomiest Generation.” In that report we found that Baby Boomers were downbeat about their lives, compared with older and younger Americans, and more stressed about their financial situations. The analysis showed that, when it comes to quality-of-life assessments, boomers generally have been downbeat, compared with other age groups, for the past two decades — starting back when some were still in their twenties. So their current sour ratings may be related to getting older, but they also may be related to the attitudes and expectations about life that they formed when they were young.

More recently, we found that Boomers have a fairly negative view of how the country has changed over the past 50 years or so. In 2011, 46% of Boomers (and 50% of members of their parents, the Silent Generation) said life in the U.S. has changed for the worse since the 1960s. Only 31% of Gen Xers and 27% of Millennials said the same.

S: How does this generation fundamentally differ from those which came before – and those which have followed since?

P: Our data tell us is that Boomers are less racially and ethnically diverse than younger generations: 72% are non-Hispanic white, compared with 61% of Gen Xers and 57% of Millennials. They are less accepting of some of the major social changes taking place these days, such as more people living together without being married, more mothers of young children working outside the home, more people of different races marrying each other, and more gay and lesbian couples raising children. And they have more conservative political views than their younger counterparts.

On a lighter note, Boomers are much less likely than Millennials or Gen Xers to have a tattoo: 15% said they had a tattoo in our 2014 survey. Roughly four-in-ten Millennials and about three-in-ten Gen Xers said they have at least one tattoo.

S: How might Baby Boomers be unexpectedly similar to other generations in ways casual observers might not expect (a topic generations speakers touch on frequently)?

A majority of Boomers (63%) say that what makes their generation unique are their values, traits and attitudes. Some 17% specifically point to their work ethic (a higher share than any other generation).

S: How have boomers changed as they’ve aged over time?

P: Boomers have become more conservative and more disillusioned with government as they have aged. The share identifying themselves as conservative (see attached chart) has gradually increased over the past decade or so as well. 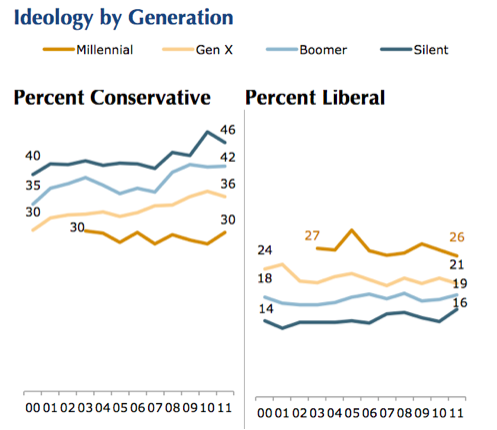 PEW RESEARCH CENTER – Based on yearly averages of surveys of general public.

S: As boomers move into later stages of life, how are they redefining the concepts of retirement and old age?

P: Boomers are not feeling entirely confident about their retirement. Our 2011 survey found that two-thirds of Boomers ages 50 to 61 who are still working expect to delay retirement because of current economic conditions. In addition, a majority of Boomers in that 2011 survey (54%) said they were in worse shape financially than they had been before the recession, and 38% said they are not confident that they will have enough income and assets to last through their retirement years.

S: More and more boomers are moving online for their news, information, shopping, and more. What’s the best way to capture their attention and interact with them these days?

P: Boomers definitely lag behind Millennials and Gen Xers in terms of their technology use, but they are not completely out of the game. In 2010, 79% of Boomers were online (meaning they said they used the internet at least occasionally). This compares with 90% of Millennials, 87% of Gen Xers and only 36% of Silents. Boomers lag further behind in terms of their use of social media websites. Again in 2010, 30% of Boomers said they use social networking sites, compared with 75% of Millennials and 50% of Gen Xers (and 6% of Silents). Younger Boomers are more active than older Boomers on social networking sites. In 2014, the median number of Facebook friends among those ages 49 to 57 was 98. The median among those ages 58 and older was 50.

S: Anything we haven’t discussed as generations speakers that you’d like to add with regard to boomers that individuals or organizations should be aware of?

P: A 2013 Pew Research report found that about half of adults ages 40 to 59 were sandwiched between an aging parent and a child.

A nice little summary from our 2011 report:

• Boomers make up 37% of registered voters, the largest share of any generation

• Now express as much frustration with government as the Silents

• Particularly concerned about their own financial future

• Uncertainty about retirement security has many planning to delay retirement

PEW RESEARCH CENTER – Based on yearly averages of surveys of general public.