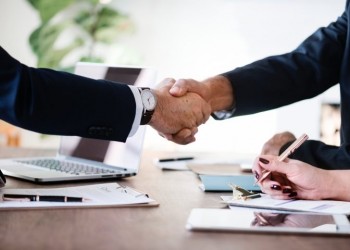 Sales legend Brian Tracy puts it best: Outselling your competition is easy when you have built long-term relationships with clients – people are more important than products. Case in point: Studies show that dropping your price, designing the world’s most well-produced advertisements, or even making a better product won’t necessarily win new customers over. CRM giant Salesforce goes so far as to state that customers are immune to traditional advertising and marketing strategies. Conventional promotional means aren’t working anymore, according to leading experts, and no matter how hard you have to now work to overcome prospects’ inhibitions – contacting a potential customer from six to eight times before they’ll potentially work with you or your team – everything ultimately comes down to your ability to connect on a personal level with clients.

In fact, investing in long-term relationship building efforts is more important than ever, according to several of the world’s top experts. Leading innovator Zendesk finds that four in five satisfied customers will sing your praises to other potential buyers, and that more than half won’t even consider switching to a competitor – but only if they love you first. (Otherwise, all bets are off.) Likewise, Bain & Company found that raising customer retention rates by just 5% can help you increase your profits from anywhere from 25% to up to 95% – a massive jump in returns. Or, put simply, incremental gains in your customer relationships can help you nearly double your profits – and with the rise of social media and online communications tools, it’s easier to build and nurture those client relationships than ever before.

But how do you create and nurture such long-term relationships, particularly in today’s overcrowded and hugely competitive world, where customers are bombarded with thousands of marketing messages daily? TWT Group founder Shawn Freeman says that responsibility is key: You have to take purposeful ownership of the customer experience. For example, TWT Group actually created a Chief Happiness Officer position to provide support for both internal employee and external customer experiences. As Get Happy’s Paula Clapon seconds too, employees deserve to be treated like customers – and, as Virgin Group founder Richard Branson often reminds, treating your employees well is the first step to teaching them to treat your customers well, too.

Building long-term relationships with partners, clients, and employees isn’t just important to getting ahead in business today either – it can also be key to survival. As Brad Wardell, founder of popular indie software and game maker Stardock Corp., puts it: “Treating customers as gods matters.” Back in 1994, his company was a small, independent studio making products for IBM’s short-lived OS/2 operating system. Tech industry veterans, he and his team weren’t amused by the way technology businesses typically treated clients – and desired to treat buyers like friends and part of their own team instead. Not only would Wardell feel disappointed with himself when he missed release dates for software products – he’d actually send shoppers free copies of other products as a surprise to thank them for their patience.

Building that trust and goodwill with shoppers was a smart move: By 1997, the OS/2 market had collapsed, as did company revenues. Luckily, says Wardell, “we discovered a business reality that apparently escaped [most rivals] – that customer loyalty is just as important as customer quantity.” Quickly switching gears, in 1998, he and his team moved to enter the Windows market. But unable to secure venture capital or bank loans, and uncertain whether or not future editions of Windows from Microsoft would be compatible with its software creations, the future looked bleak for Stardock. So Wardell and co. decided to take a risky approach, and sell their new product (Object Desktop for Windows) as a $50 one-year subscription that offered users all current software features, plus any new features developed in the 12 months following. Shoppers were also allowed to keep the product, even if they didn’t ever renew this subscription.

The catch being as follows: The first year that Object Desktop for Windows was on the market he says, it was little more than a concept – most of what Stardock had to offer “was just a bunch of promises and partially functioning code in a lab.” As he points out: “It required users to pay $50 for a bunch of software, sight unseen – and it would require a lot of them to do it, because creating all this software was going to be expensive and time consuming.” However, customers – who’d migrated from OS/2 to Windows by the thousands – purchased the app by the thousands and remembered how Stardock had treated them: Like friends and family. As a result of this groundswell of trust and support, the company not only quickly turned the ship around – it went on to create many other hit products. “Customer loyalty really matters,” explains Wardell. “If you treat people fairly, with respect, as individuals instead of “consumers,” you will earn their respect and trust in return.”

How many start-ups and even market leaders die because they focus on getting the most customers rather than taking care of the ones they already have? Don’t make the mistake they did, of ignoring Kevin Kelly’s famous 1,000 True Fans axiom, which reminds us that it is financially wiser to have a smaller, loyal customer base rather than a broad, superficial one. Going forward, in order to succeed in every field, it’s imperative to create deeper, more meaningful relationships with clients, and find ways to foster their trust and support at every turn. Products and services matter, but so do people: It’s vital to think about how your organization interacts with its audience at every touchpoint, and how to create positive exchanges at every turn – including after the sale.

Nearly all of these factors have to do with consistency. For instance, the billing platform Aria touts that customers should be able to count on every frontline employee in your business as being a reliable and up-to-date source of information. Providing superior service and helpful insights not only helps you champion more open and honest dialogue, and put customers’ best interests first, but also reinforce universal, shared values throughout your organization.

Find ways to consistently meet and exceed others’ expectations is also key. Customer service expert Shep Hyken noted this principle in action when he direct messaged an airline – from midair – when he realized that he was going to miss a flight connection. The carrier rebooked him on the spot and made sure that when he landed, he was ready to hit the ground running again. Imagine the standard the airline set for itself, and how much loyalty it gained through this simple act of altruism – not to mention the high bar it created that competitors would have to leap in order to convince Hyken to look elsewhere for service. Hyken is still talking about the experience today, and still helping attract new customers to this air carrier as well.

Chip Conley, founder of the Joie de Vivre hotels, argues that customers operate according to something that resembles Maslow’s Hierarchy of Needs, and our job is to successfully meet their needs on every level of the pyramid. From a hospitality perspective, it begins by a hotel providing basics such as a bed ad clean room on up to a robust facility and welcoming, service-focused staff. But the real relationship building, begins on the second-highest tier, Esteem Needs, Conley argues, where customers begin to be treated like a VIP. According to him, this is the point at which people begin to become loyal – because you’ve begun to treat them like more than just another number on a spreadsheet. The highest level, Self-Realization Needs, involves relationship-building strategies so advanced that you help meet needs that a client didn’t even know they had before they knew that these needs existed – and doing so can help you build product evangelists.

Needless to say, it’s more important than ever that both organizations and individuals focused on building lasting, long-term relationships. To get ahead in business, don’t just look for ways to offer value – look for ways to continuously surprise and delight others, and put their best interests above the immediate needs of you and your staff.